In June, the Pakistan IHR Strengthening (IHR-S) country team hosted a week-long visit by two senior officials from our sponsoring department the Department of Health & Social Care (DHSC). Nick Adkin (Deputy Director) and Helen Tomkys (Head of GHS Preparedness) were joined by the Head of the project and other IHR-S UK team members. The visit was part of a wider visit to the Fleming Fund and GAMRIF projects in Pakistan also funded by DHSC. DHSC colleagues were able to see the success and significant progress of the IHR-S work in Pakistan, as well as increasing their understanding of the opportunities and challenges in implementing IDSR in Pakistan.

The group met with key officials to strengthen the ties for bilateral collaboration, discuss issues of mutual interest and express the department’s continued support for strengthening IHR/IDSR innovation in Pakistan. 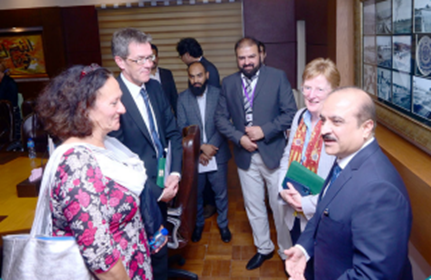 The visit included a number of meetings with key government ofﬁcials at both national and provincial level and began with a visit to our partners in the National Institute of Health (NIH) where the UKHSA local team are stationed. In NIH they were welcomed by Major General Aamer Ikram (Executive Director), Dr Muhammad Salman the Chief of Public Health Laboratories Division and Dr Mumtaz Ali Khan the Chief of Epidemiology & Surveillance Division. NIH officials acknowledged the work of UKHSA as pioneers of IDSR in Pakistan and assured ongoing collaborative work in achieving real time integrated surveillance system and public health lab networks in accordance with IHR 2005.

The visitors also attended a quarterly National Technical Working Group on Surveillance and Data flows facilitated by the in-country IHR-S project team in collaboration with NIH. This forum is a space for provincial and district IDSR focal points from across Pakistan to share their learning, showcase their progress, identify challenges, and make key decisions on disease surveillance and data flow. Individual provinces presented their work and progress they have made so far, and the team applauded the efforts of provinces and NIH in expanding surveillance to as many as 43 districts. 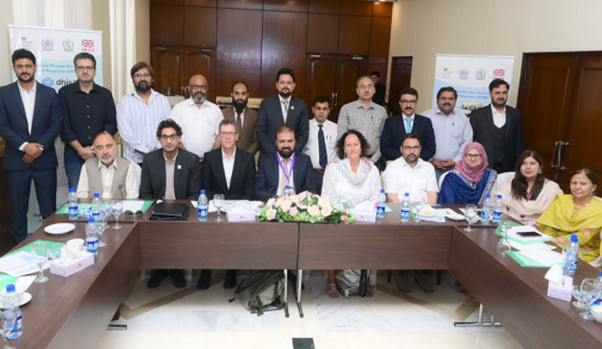 A meeting in the Ministry of National Health Services Regulation and Co-ordination was hosted by the newly appointed Federal Secretary of Health Dr Aamir Ashraf Khawaja and the Federal Director General of Health services (DGHS), Dr Rana Safdar at their offices in Islamabad. The DGHS recalled his initial meetings with the IHR Country Lead in 2016 when the small team led by the now Head of Project, he said pioneered IDSR in Pakistan. For this he thanked DHSC and UKHSA and for their ongoing support in Pakistan for strengthening IHR and IDSR and he looked forward to the next 3 years working together. The Federal Secretary Health also extended his complete support for the project and thanked the delegation for their visit and valuable feedback.

Later in the trip, the team visited Lahore, where they met Punjab’s Secretary Health, Mr. Ali Jan Khan, Additional Secretary Dr Asim Altaf their team to discuss the opportunities for future collaboration to strengthen IDSR in Punjab and they further assured support for strengthening of IDSR in Punjab. 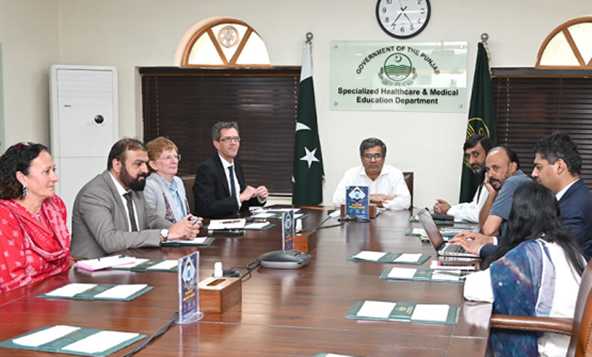 To celebrate the IHR project’s partnerships in Pakistan, the UKHSA local team hosted a stakeholder dinner in Islamabad. Officials from all key health partners, including Ministry of Health, NIH, Fleming Fund, WHO, UNICEF, CDC Atlanta, JSI, HSA and EMPHNET were in attendance. 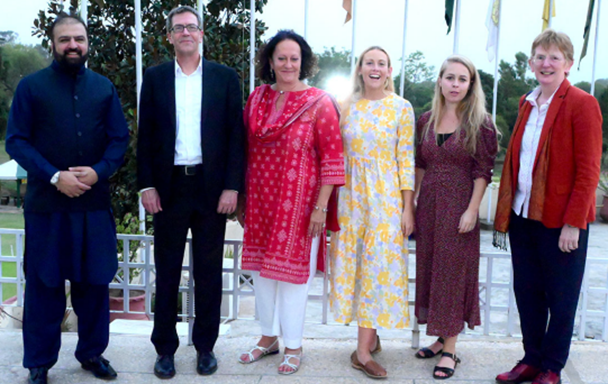 These fruitful meetings demonstrated first-hand to DHSC colleagues how far the project has come in the last six years and its journey of achievements and challenges along the way.  The strength of the project’s partnerships continued to shine through and DHSC colleagues regularly commended the depth, breadth, and warmth of the UK/Pakistan relationships and the continued support for the project’s work in Pakistan.